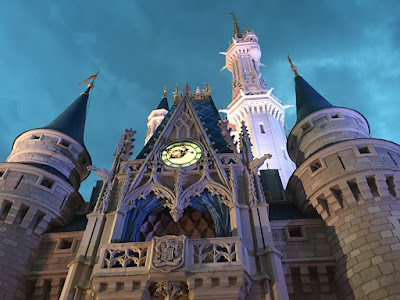 I selected this photo of Cinderella's castle from a trip I took for several reasons. On the one hand it's kind of iconic, and represents so many good memories of trips and times gone by. On the other hand this picture is a bit ominous. It kind of gives a feeling that something bad is going to happen with the storm clouds overhead. I think it kind of sets the tone of how I have felt about the direction of Disney theme parks for sometime.

The dictionary definition of "Manifesto" is a written public declaration of policy and aims that declares the intentions, motives, goals, views and opinions of the issuer. I hope to explain in this Manifesto just what savethemagic.com's reason for existence is, and what I hope it will accomplish. First, before I do that, we must take a trip back in time, and review where we have been.

There is no dispute that Disney theme parks are the king of theme parks worldwide. They got to this position following Walt Disney's philosophy of keeping things clean, family friendly, high quality, and reasonably priced. In fact there was a time, not really all that long ago, in the 60's 70's and 80's of a golden age of Disney theme parks. This golden age lasted right up into the 1980's and at that time, Esmond Cardon Walker or "Card" Walker was the top executive and CEO at Walt Disney Productions. Card started working for Disney as a mailroom clerk in 1938, and over many years was promoted to Vice President of Advertising and Sales, before eventually being elected to the Board of Directors in 1960, and then CEO in 1976.  Card was a close associate of Walt, was part of the small working group that directed the purchase of the Disney property in Orlando, and was instrumental in getting the "EPCOT" theme park concept built. This was, in many ways, a high water mark in Walt Disney World theme park history.

During the years that Card ran the company there was a certain feeling at the Disney theme parks, and unless you visited during that time, it is almost impossible to describe how great and special that feeling was. It was more than just the attractions, classic though they were, but it cut to the core of the place. It was a feeling that guests were to be valued, above all else. Guests were not seen as "revenue units" but rather as people who were there to enjoy a vacation unlike any other available anywhere else in the world. I can say, since I was there during this time, that anything systematic that would disturb a guest's vacation, would horrify those executives. In short, they cared, and you could feel it at the place.

In May of 1983 Walt's son in law Ron Miller took over from Card and became CEO of the Walt Disney company. Ron only lasted until 1984, and he was outed in favor of non-disney executives Michael Eisner,  Frank Wells, and Jeffery Katzenberg. With Eisner in charge things started to change, and not for the better. Many of the old guard, those who worked directly with Walt, began to retire. Many experts were brought in from the outside, MBAs, experts in accounting, and financial planning, and "strategic planning", and slowly but surely the thinking and bureaucracy that has infected any of a number of great American corporations was brought into the Walt Disney Company. Somehow in all this, the guest, was forgotten.

When Eisner took over the Walt Disney Company in 1984,  Disney was really a smallish theme park operator, and the revenue of the company was $1.5 billion.  By the time Eisner left the company in 2005 revenue was $30.75 billion, and the company had been transformed into a media giant. The stock price increased 1,646 percent, and the total number of employees grew from 28,000 to 129,000.

The incredible growth that Disney experienced was fueled by many things. Disney started to advertise the parks, something that they didn't generally do in a major way, prior to Eisner. Regular ticket prices started to increase every year with out fail. Seven additional theme parks were built the world over. The new theme parks were built very much with cost in mind. Many, (Disney MGM, California Adventure, Animal Kingdom etc.) were really half day parks, with full day admission prices. Outside hotel companies were brought in to build resorts and to "develop" the Florida property as quickly as possible. The master plan for the property was abandoned, and hotels and theme parks were put where ever, causing serious transportation problems all over the Florida property.

Eisner severed ties with the Disney Company in September of 2005, and turned things over to Bob Iger. Iger accelerated the trajectory that the company was already on from the Eisner years. Taking the corporate infrastucture that Eisner constructed to new heights, Iger was able to buy a lot of outside creative content such as Pixar in 2006, Marvel in 2009, Lucasfilm in 2012. In short the Disney company became an aggregator of creative content. The Disney company began to think in terms of profitable franchises, rather than the traditional way of looking at the company as a symbiotic whole. The comic booking of the parks is neigh in the future. Disney has departed from creating themed parks, to themed "lands" which have loosely to no connection to the overall park theme. Under this sort of thinking we get a cartoon character overlaid into the formerly non-fiction Norway pavilion of Epcot, and a world of "Pandora" (another non-disney creative product) in a park dedicated to realistic representation of the natural world. Soon we will even have a realistic other worldly Star Wars land, in a park dedicated to making movies. Overall themes don't really matter, when sacrificed on the altar of the "Franchise".  By 2014, the last year I have figures for, attendance at Walt Disney Attractions was over 134 million annually.  And so here we are.

On October 22, 1997 in an article which ran in the Orlando Sentinel, it was reported that the Eisner regime was planning on shutting down the classic Mr. Toad's Wild Ride in the Magic Kingdom in Walt Disney World. The idea behind the shut down was to make way for a Pooh ride, which was felt to be more marketable to the masses, rather then the obscure Toad. Within one day of the article appearing in the news paper, the savetoad.com website was born by JT Toad. In what would be the first of many, this site galvanized public opinion, and drew huge media attention to many of the problems which had developed with the way that the Disney theme parks were being run. While ultimately the site wasn't successful in saving the attraction from the wrecking ball, the site was the first to tap into the public's collective love for classic Disney attractions.  Around the year 2000, Al Lutz started the disneyland blues web site, in an effort to draw attention to the declining general conditions of Disneyland under Eisner's leadership. Also around 2000, John Hornbuckle (known online as "Parrothead") inspired by what Al Lutz had done, started a web site called wdwblues, to draw attention to the declining general conditions of Walt Disney World. Around that time, in 2000,  I became involved in the wdwblues movement, and for a time felt that the movement was making a real impact in helping to draw attention and to improve the Disney Parks. While these very great sites have since all ceased to be, I feel we once again need a site to galvanize the public, report and share news, and draw attention. This is needed now before its too late, and classic Disney theme park entertainment, as we have known it, is lost forever.

This site will exist to report news, share opinions, and to draw attention to issues at the Disney theme parks, with a special focus on Walt Disney World. Some, but not all, of the problems in no certain order are;

I am a Disney theme park fan and historian. I care a great deal about the quality and long term health of the Disney Theme Parks. I think the parks are something unique in the world, and are important as the creative legacy of Walt Disney. Many very talented, mostly unknown, people have labored to make the Disney Parks all that they could be and I want to honor their legacy as well. I believe that the parks are worthy of saving for everyone. This site exists to return the Walt Disney Company back to the quality for which it used to be famous while Walt Disney was alive. The goal is to save the magic for future generations to come.