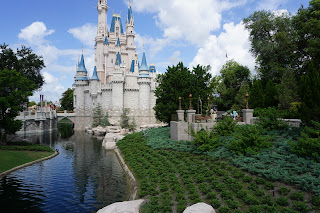 Disney parks are an inherently positive place. The feelings that you get from a visit to one of the theme parks is, admittedly infectious. I think, that because of this, there is an unusual amount of over positivity as surrounds Disney. You see it when ever anyone dares to mention anything that doesn’t fit the narrative of “everything is always great” at Disney. There are certain websites and communities on the Web where if you dare to criticize anything Disney does - you would be silenced or banned. Not here. To be clear - I love Disney. I am a great fan of the parks and the creative legacy of Walt. In fact I love them so much - that I am willing to be honest - in order to save them from being destroyed.

My great fear is that we will have a new generation of kids coming up who will never know the Disney that was - and just how great it actually was. Instead of tranquil park like settings, with incredibly detailed and themed attractions - they will only know an over crowded over priced thinly themed roller coaster park - with little connection to its history or to the greatness of the vision that once was.

The theming and the park like atmosphere are important. It’s what sets the mood of the place and communicates to people on a very deep and almost sub-conscious level. We are loosing it. We’re loosing it when they design new attraction areas for “though-put” because of the immense crowds.

Take for example the new hub at the Magic Kingdom in Orlando. The hub in front of Cinderella’s castle wasn’t redesigned because it was somehow or other bad. The hub had been, with some changes, more or less the way it had always been since 1971. No the hub was redone in order to pack in more people for the fireworks, and to create special “viewing” areas which can be reserved in advance. This wasn’t an improvement to make things better. This was a change to cope with new reality.. and we sacrificed the park like setting what we once had in the name of crowd control. It’s still nice.. but its not what it was.... and that is a huge problem.

I don't point out any of this to be overly negative or because it gives me some great thrill to rain on someone’s fun. Indeed I do it out of a love for the place, and a respect for the vision that is being lost. Disney has lost it’s heart - and is now being driven not what is always best for the guests - but rather what is best for the bottom line. It’s being run, like any other corporation, and unfortunately that sort of thinking will absolutely kill it.

Many folks will point out that Disney is a public company with shareholders and there is a requirement that Disney do everything that it can to return the most profit possible back to the shareholders who are the owners of the company. And I do understand this line of thinking very clearly. How ever Disney doesn’t understand what it is selling or where the real value is in what they offer to the public.

When Walt was building Disneyland - and they were building the Plaza Inn - they tried to talk him out of buying real cut glass chandeliers. Plastic would be fine.. how would anyone know that the furnishings were real.. no one would care. Walt thought differently - the value wasn't that people would come and eat hotdogs in a “recreation” from the turn of the century, but rather they would come and eat hotdogs in a real (as he could make it) turn of the century restaurant. What Walt was selling is the experience of the special.. not the experience of the cheap, or expensive, or crowded, or what to some would be the most “cost effective”. Walt was selling an experience that you could not get anywhere else in the world. People know and can feel quality. That’s the main product that Disney is selling. Follow that guideline and the profits will take care of themselves.  Everything else is secondary.
Posted by Uttini at 3:13 PM No comments: